For years, I struggled with adult acne. It got worse after having kids and out of sheer desperation, I began exploring a variety of skincare routines to try and fix the issue. You can read about the process of discovery in this post and this one. My skincare routine has changed significantly over the past year and I understand that it may continue to do so in the future. That being said, I think it’s good to share my experience as I go in the hopes that anyone struggling with the same issue can see my process and can find something that may work for them as well. In terms of my acne, I have not head a breakout in at least 6 months. In fact, I’ve only had a couple of pimples in general, they were not cystic in any way, and went away within a couple of days. I can’t really pinpoint the final change that affected my skin, but I thought I would share a little about my routine now as well as some dietary changes that I think had a significant affect. And they are not going to be what you think. 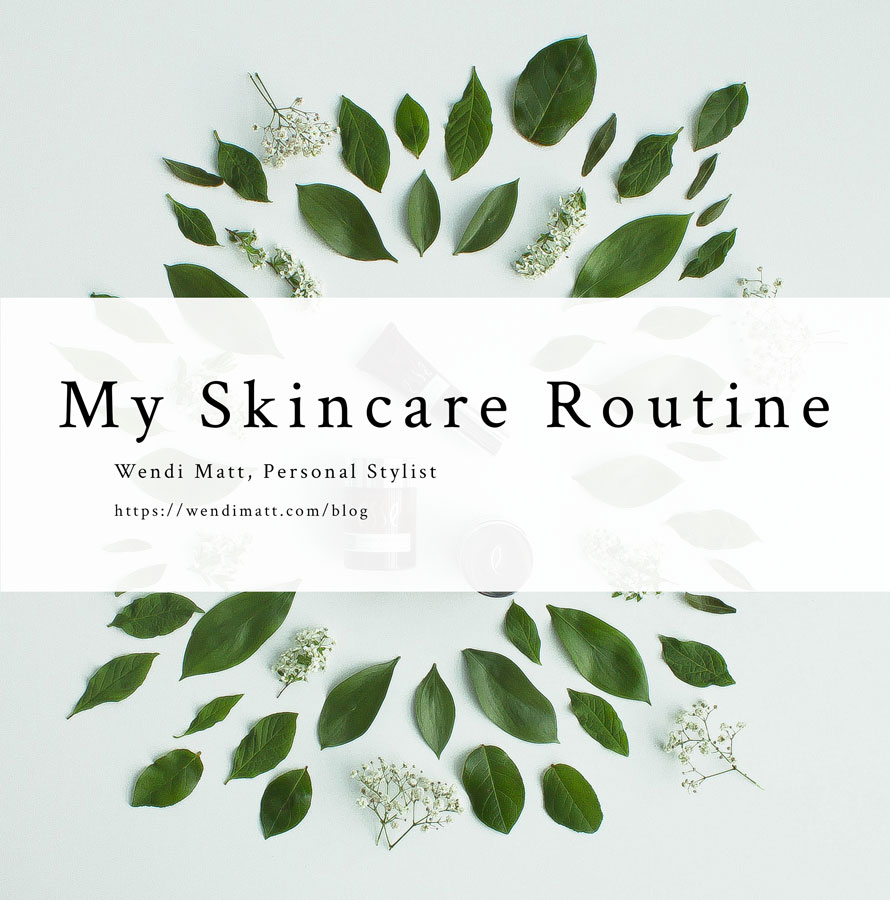 Before I begin with my skincare routine, I want to mention something about diet, skin, and my experience. I never had acne as a teenager. Though my menstrual cycle was difficult, especially cramps and bloating, hormones never had a huge affect on my skin. It wasn’t until my mid 20s that I began having hormonal breakouts. I tried a variety of skincare products including proactiv, arbonne, and finally clinique. During my pregnancies, my skin cleared up beautifully and it wasn’t until I stopped breastfeeding my second child that my skin lost it’s mind. I had horrible, cystic acne breakouts that left me embarrassed to leave the house. I was frustrated, confused, and embarrassed to leave the house. I had to come to a place of acceptance with it because I was burning myself out trying to find a solution for what could be causing these issues.

As many of you may know, I began my journey with intuitive eating about a year ago. I read the book, began following non diet dietitians like Tiffany Roe, Nourishing Minds Nutrition, Wendie Schneider, Jessica Roethly, and Evelyn Tribole. I had resigned myself to the fact that I was just going to have acne and I had surrendered to the fact that I had absolutely no control over my skin. This was mainly to get right with my relationship with food, something with which I’ve struggled for nearly 20 years. In addition to discussing health at every size and intuitive eating, Jessica also talked a lot about hormonal acne, helping me to feel more at peace with my skin and my body. These women and their message of acceptance were critical in the acceptance of myself, the changes my body was going through, and my relationship with food. I spoke to one of the nutritionists briefly via IG from Nourishing Minds Nutrition and she talked about the effects of restriction on the liver. It was then that I realized this: my acne became an issue around the same time that I first started dieting. After getting sober in 2000, my struggles with weight became a huge issue and thus, I began the diet dance. During my pregnancies were the only times in those 20 years that I did not diet. After I stopped breastfeeding Alex, I ended an almost 3 year period of heavy restriction because he had an intolerance to dairy, soy, and corn which incidentally was also the time that my skin was the worst. In fact, over the years, my skin was the worst during the heaviest times of my restriction. After talking to Wendie and the Nourishing Minds Nutritionist, I realized that the periods of heavy restriction were such a strain on my liver that it couldn’t properly process my hormones. It’s such a departure from what we are taught about skin and diet, and I realize every person’s story is different, but that revelation has been amazing to me. That in the times when I thought I was “healthy”, I was actually not. And in my days of being my thinnest, my health was actually suffering. Wow.

Is that the only reason my skin has cleared up? I’m not sure. So I want to share my skincare routine with you and specifically talk about a couple of products that I think were also beneficial to my skin health.

Morning: In the morning, I do a very simple wash. I use the Derma E cleanser or the Beautycounter, typically whichever is closer.

Evening: To cleanse my skin in the evening, especially if I’m wearing makeup, I start with the cleansing oil. The Primally Pure oil is my absolute favorite. I just recently got the cleansing balm from Cln & Drty and I love that as well. If you’re not sure how to use a cleansing oil, here is a blog post about it written by a top esthetician from PP. As she says in the article, I do follow up with a cleanser that has vegetable glycerin. Typically, it is the Derma A Charcoal cleanser or if I’m extra lazy, I will use the Rose Water Micellar Cleanser from Cln & Drty. Both seem to work well. 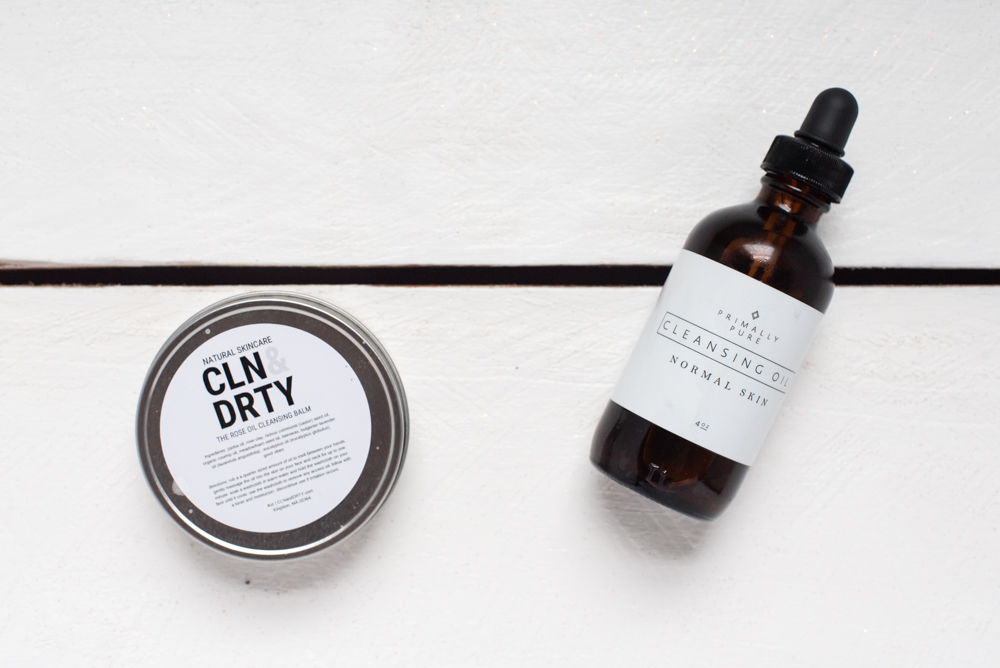 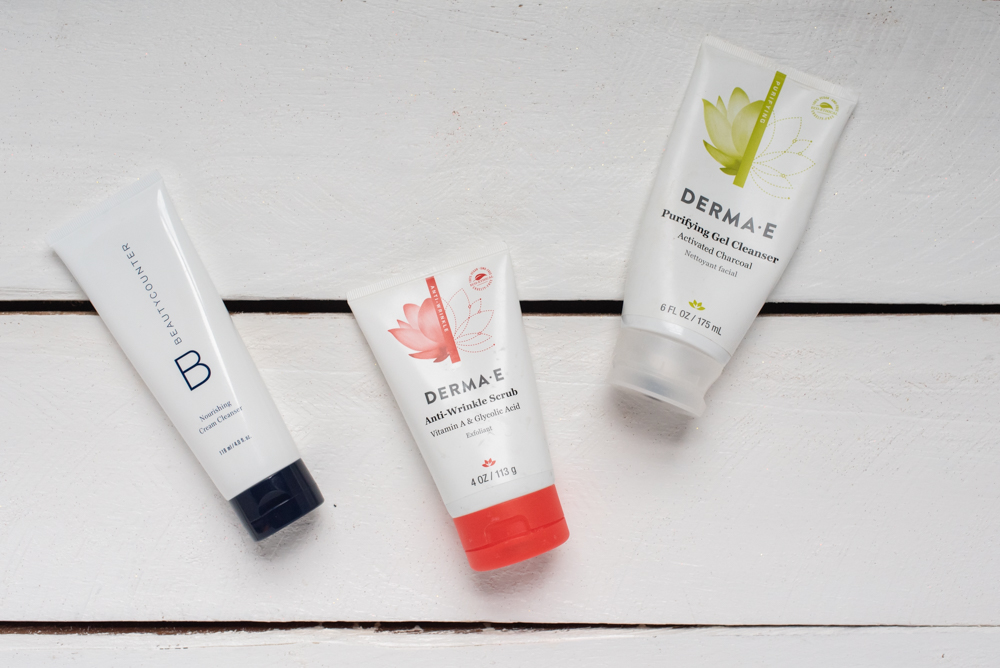 I have tried a variety of toners but the one that has been instrumental in helping clear up my acne, I believe, is this balancing toner from Cln & Drty. In fact, I tried to make my own toner using the same ingredients, but have never been successful in finding the right balance between the ingredients, so I prefer this one. And honestly, it’s so affordable, why even bother? If I am out of the toner for some reason, I am traveling, or I am extra lazy, I will just spray my face with this Primally Pure toner. I like the Neroli and that’s an expensive EO, so again, instead of trying to make my own, I like using this. 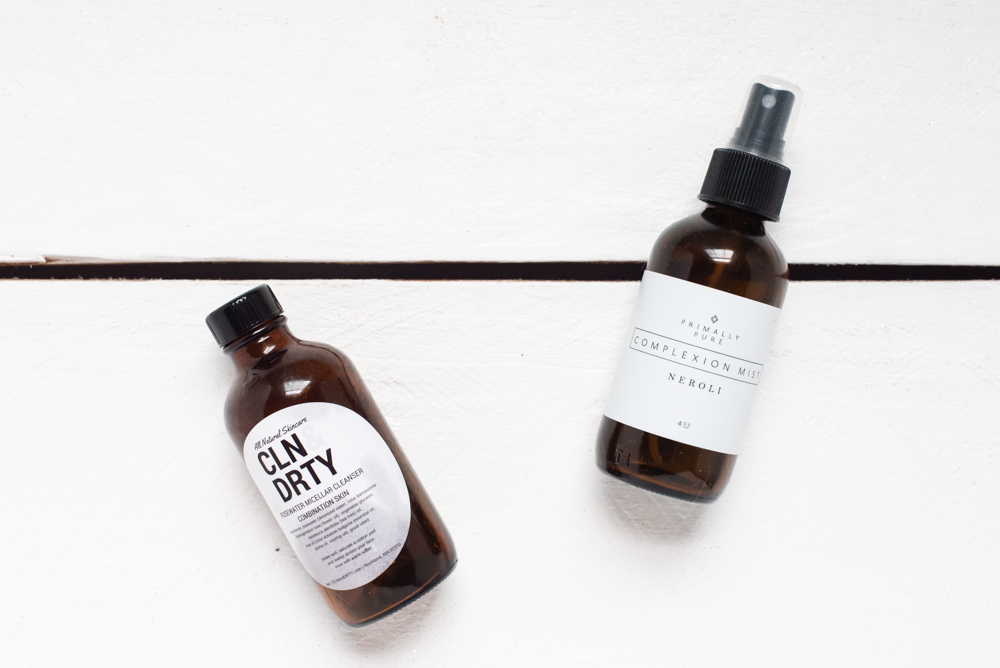 Morning- I have started using the C Serum in the morning and I really like it. It does help my skin flow beautifully. 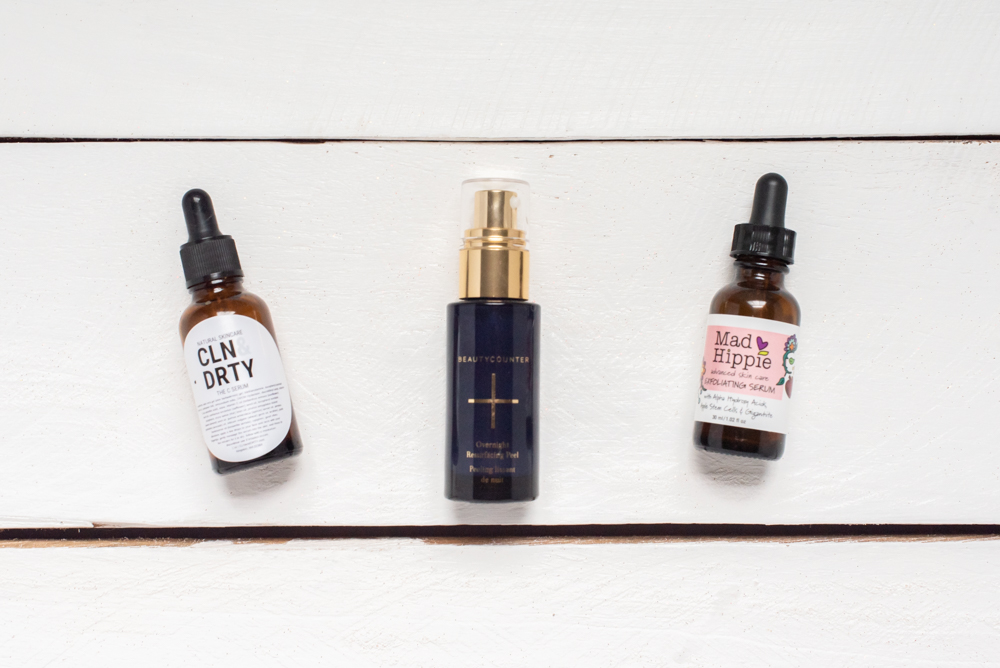 Morning – I use the Beautycounter moisturizer in the morning

Evening – I use the PP beauty cream in the evening. And I love it. Again, I think this was a life changing moisturizer. I love it. I freaking love it. 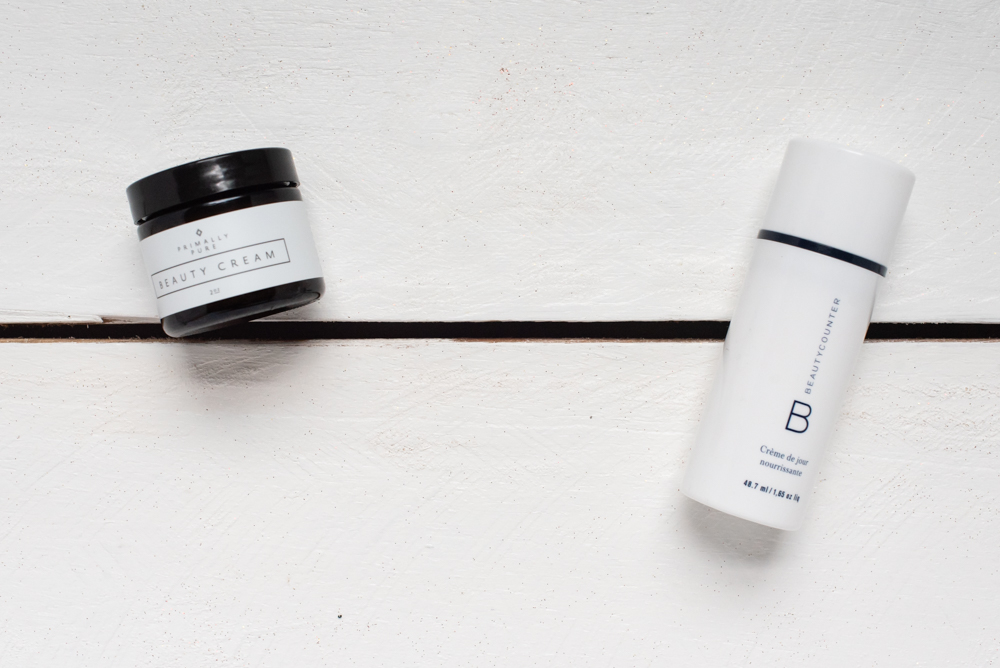 Eye Serum – I really love this lavender coffee eye serum. I only use it at night because the oil doesn’t soak in as well in the morning

Acne Spot Treatment – I honestly have only used this once or twice in the past 6 months, but when I do, it is a tremendous help in clearing up acne quickly

Lip Balm – I have been using lip balm at night to help my dry lips. The PP is my very favorite ever but I do like the peppermint one from BC too 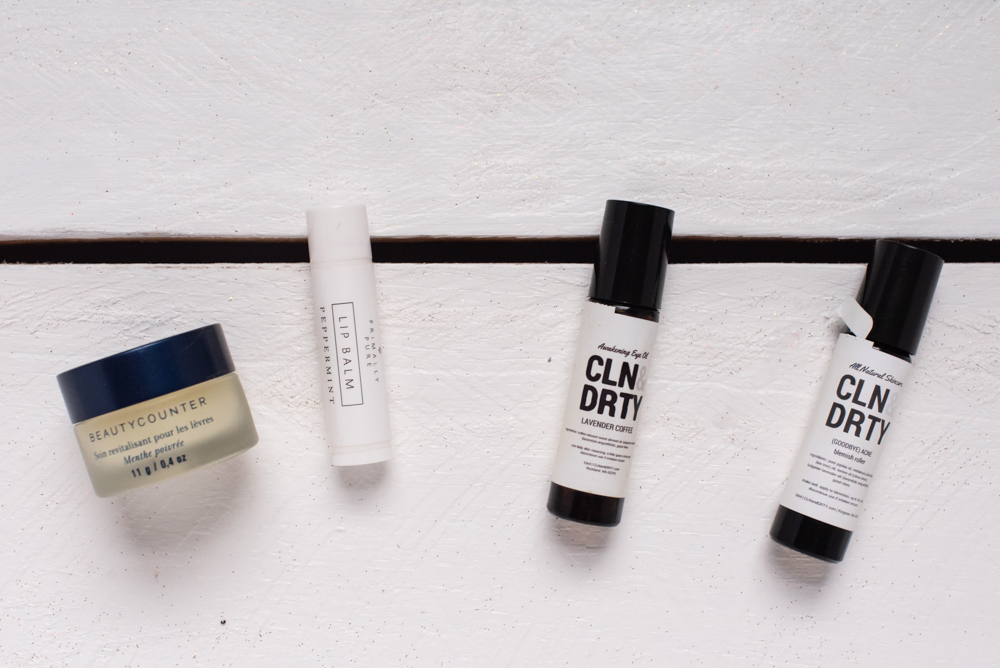 Once a week, sometimes once every other week, I will use a face mask. The BC charcoal mask is my favorite, but I also like this clay mask I found at Whole Foods. The Cln & Drty mask feels good too!  I am out of the big tub, so I just used this sample she sent in my last order. Since I started using the Mad Hippie serum, I haven’t felt the need to do the masks as much because it does the exfoliating for me, but I do like a face mask every once in a while. It feels so good. 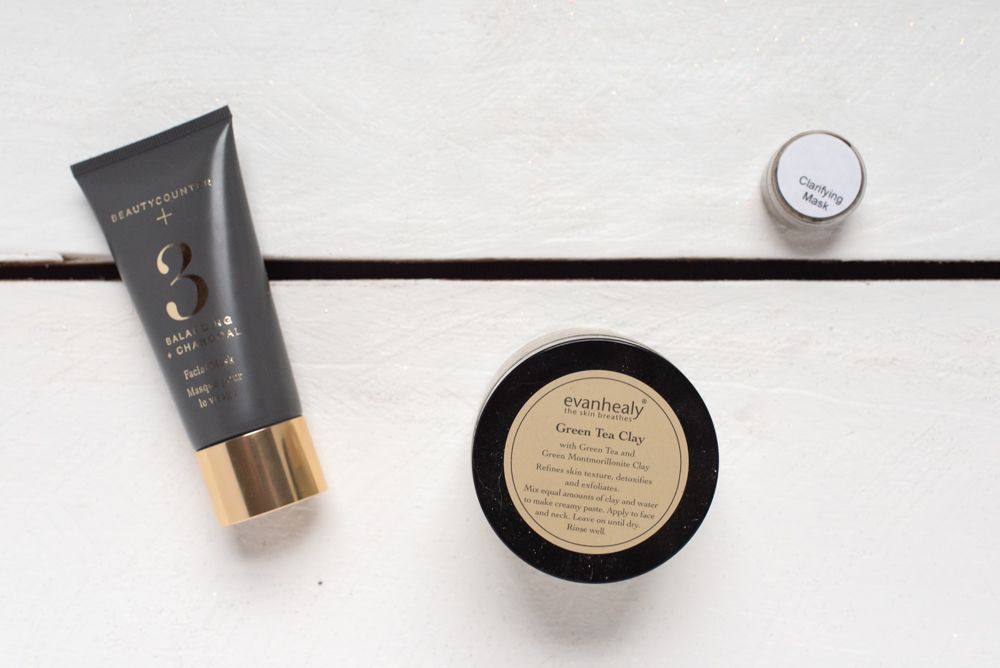 I hope this was helpful. I don’t sell any of these products, I wasn’t given any of these products, I honestly found them on my own and have tried them all out extensively. The thing I love about some of these companies like CLN & DRTY and Primally Pure is that they are small businesses, family owned, and the people are wonderful. Both Paula from CLN & DRTY and the estheticians as PP have been very helpful in my skincare journey. I have read blog posts and listened to podcasts and I always learn something new about them and their products. I have become a big advocate for them because of their products and their customer service. I believe in them so much. Thank you so much for reading and please feel free to message me if you have any questions!