Happy New Year!! I haven’t written in a while, mainly because my kids have been home and the holidays were busy. I am also reevaluating the direction of the blog, the direction of the business, and the direction of Wendi Matt, the brand. I’m thinking it’s going to be much more self care focused, incorporating the usual beauty and style posts, as well as self care tips, healthy eating, and ranting about what’s wrong with the world. Totally kidding… I do want to share more of my experiences though, because often times, I’ll take a chance and say something about my struggle with “insert whatever thing I’m struggling with at the moment” and someone will raise their hand and say YYYEESSSS. I want more of that, so I am going to try to incorporate those posts in the mix, whenever I can. In terms of my business, my focus for 2018 is photography. I’m going to work on a lot of person projects including a 365 project. This will be featured on the blog as well. That being said, today’s post is about beauty. Because ya know… I’m confusing. Without much ado… here is my updated beauty regimen.

*It’s a long post today ladies, so I wanted to let you know that there is a discount code at the bottom of the post if you’re interested in some awesome natural skincare. Use code WENDI15 for 15% off the purchase of any products from CLN & DRTY 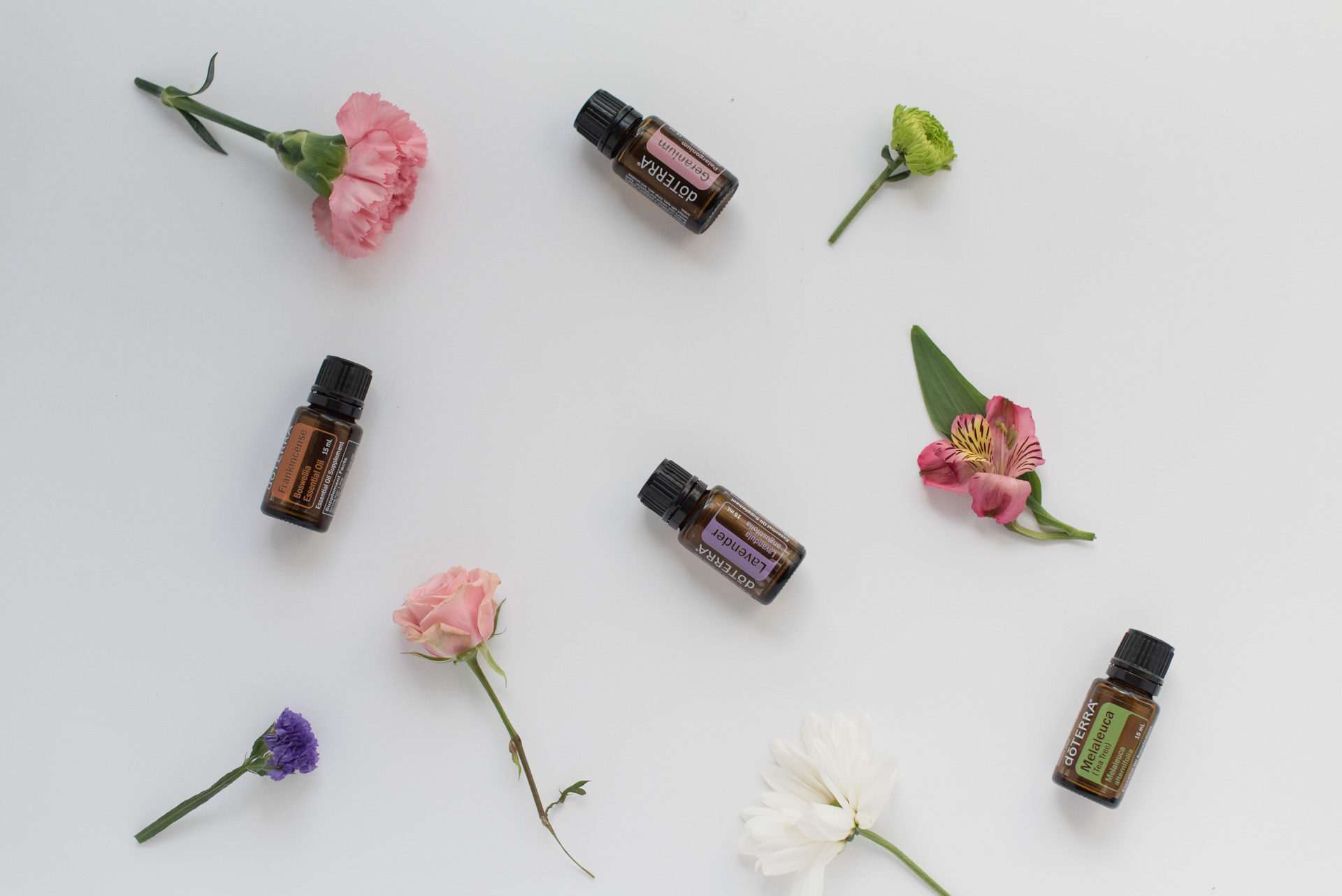 Last year, I posted about my beauty regimen but also mentioned that I was struggling with acne. Growing up, I had no issues with acne, so imagine my surprise when I turned into a 16 year old boy at the age of 27. I was completely devastated by the fact that my skin was not perfect, so I turned to the acne killer, Proactiv. Proactiv helped my acne for the moment and then TORE MY SKIN UP. I still don’t think I’ve recovered from the damage my skin incurred, but what can I do. I know, now, that was the decision I could’ve made for my skin. I didn’t care about the long term affects, though, I just wanted to be pretty. Really, the way I treated my skin was the way I treated my body for a long time. I tried to beat it into submission without any regard for it’s health. Fast forward to today, a mere… ahem… 10 years later, and I can see where I went wrong.

Through two pregnancies and a year of breastfeeding, my skin was beautiful. Glowing, no acne, cover of a magazine beautiful (maybe a bit dramatic, but you catch my drift). A year after having Alex, my hormones changed, and my skin had the worst breakout it has ever had, minus the time I tried Arbonne. I had horrible, inflamed, cystic acne all over my chin. I still have terrible scarring from me desparately picking at it. I went to an esthetician who told me to try SkinCeuticals. That’s when I wrote the post above. It worked okay but for the most part, I was struggling with cystic acne and massive breakouts. I knew it was hormones because I was still breastfeeding but I had started my period and all the fun stuff that comes after having a baby. Tips that I read for curing it were getting enough sleep, drink plenty of water, try to destress. Um, I have two kids under the age of 3, at least two of those three weren’t happening. I continued to do research and tried a lot of different things. 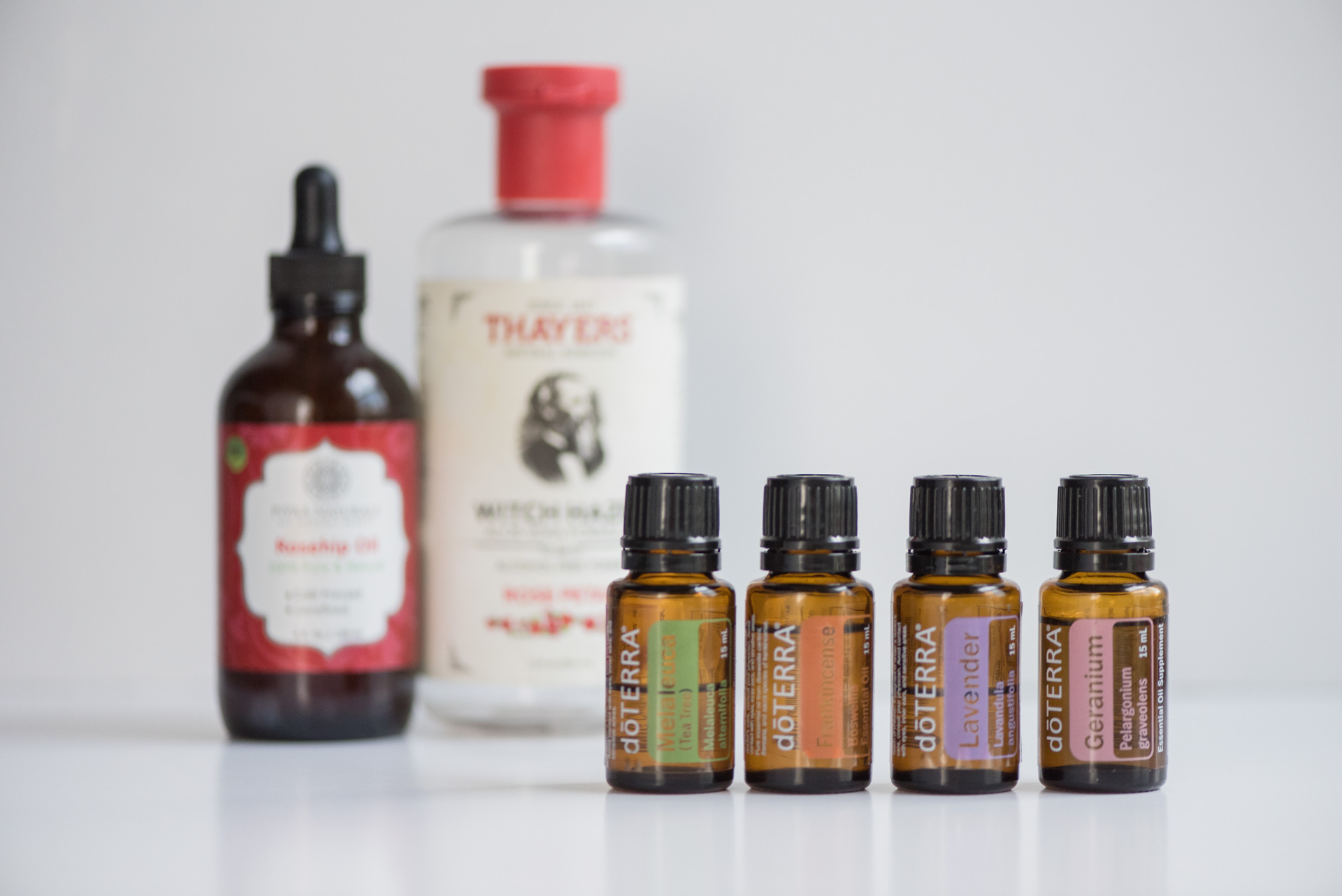 I’m not 100% sure that I can pin point one specific thing that helped my skin. I have been trying to drink more water throughout the day and I know that’s always going to be a constant struggle. The weeks that I do a good job with drinking water, I can see it in my skin. I also started taking a couple of supplements recommended to me by my friend and nutritionist, Wendie Schneider from the Pantry Doctor. I started taking a daily multi vitamin and ashwagandha capsules. I have been trying to incorporate skin friendly foods into my diet, such a turmeric. I am dedicating 2018 to establishing a daily mediation practice, something I used to do before having kids, and finally feel like I can do again. I know those are all lifestyle choices I can make daily to help treat myself with care, and in turn, help my skin.

Here’s the thing, I found out that one of the most popular ingredients used to treat acne is a major irritant for my skin, salicylic acid. If I use anything with that in it, it causes more breakouts. It took me a while to figure it out and since removing it, my breakouts are much less frequent. Also, when I do breakout (when I’m ovulating or have my period), the pimples become much less irritated and go away more quickly, and without scarring. I have a lot of scarring now and so, i still spend a lot of time covering them up. It does seem to get better and since I’m a little nervous about any of those major treatments that help lighten the skin, it may be something I have to deal with forever. 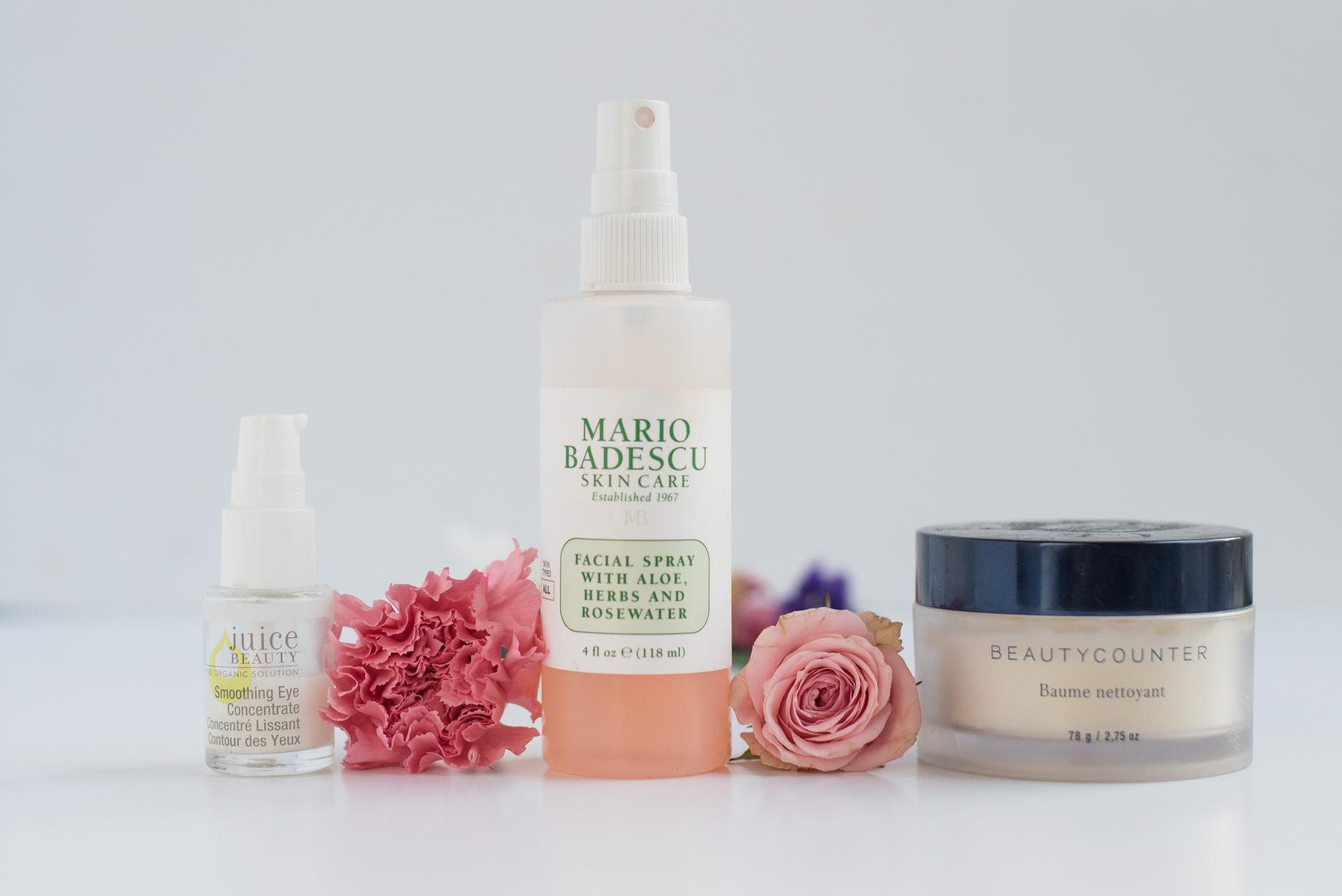 2. Wash Face – I use BeautyCounter’s Charcoal bar and like it. I want to try Primally Pure’s Cleansing Oil because I’ve heard good things about it but also, there is a gal I follow and freaking love, Cln & Drty, so I will probably try her wash next.

HOW – I get the soap sudsy and wash all over my face for about a minute. I just rub my face all over, and then wipe it down with a new, wet wash cloth. I use a lot of wash cloths. 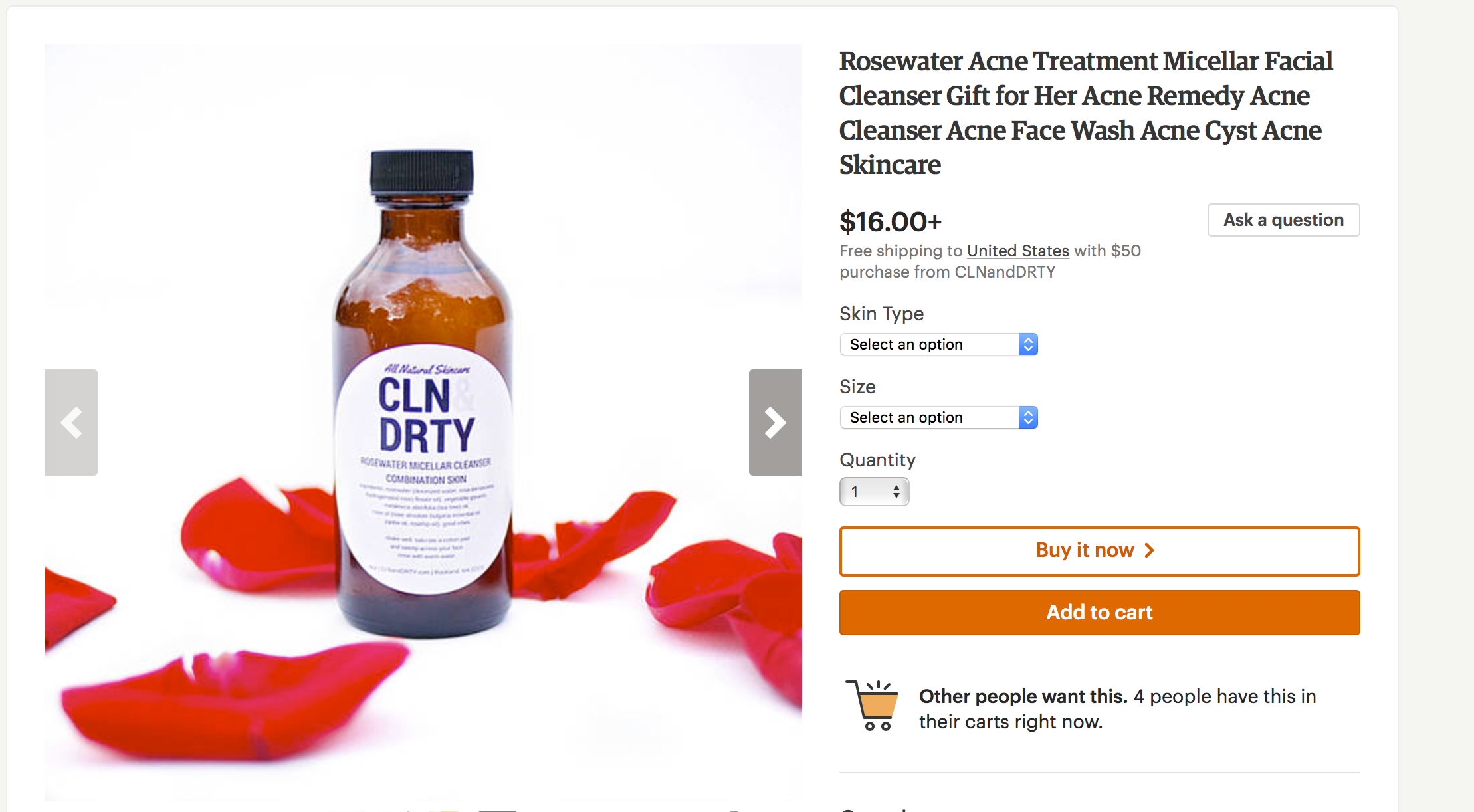 3. Toner – I made a DIY toner that I really liked, using essential oils. Once that was out, I just continued using the Thayer’s Witch Hazel which was an ingredient in my DIY toner. I think this was a KEY INGREDIENT in my skin clearing up. I am currently using the Pixi Glycol toner to see if it helps with my scarring but if I don’t love it, I’m going to go to Cln & dtry to get her toner.

4. Serum – I go back and forth with this one. Sometimes, I make my own which includes Rosehip Oil and essential oils such as geranium, clove, frankincense, lavender, and tea tree. Honestly, though, the geranium is the oil that has made the biggest difference, so sometimes, I just add a drop of geranium into a couple of drops of rosehip oil and rub it on my face.

In the summer, the rosehip was a little intense for my face, so I used grapeseed oil instead. Now, in the dead of this bitter cold couple of weeks, my skin is dying of thirst, so I use the rosehip, and then I am trying a moisturizer from Juice Beauty. I do like their eye cream, which I use as well, and they were rated as a top organic beauty company. I’ll let you know how that goes, so for now, I’m just vouching for the oil since i know that has really helped my skin. 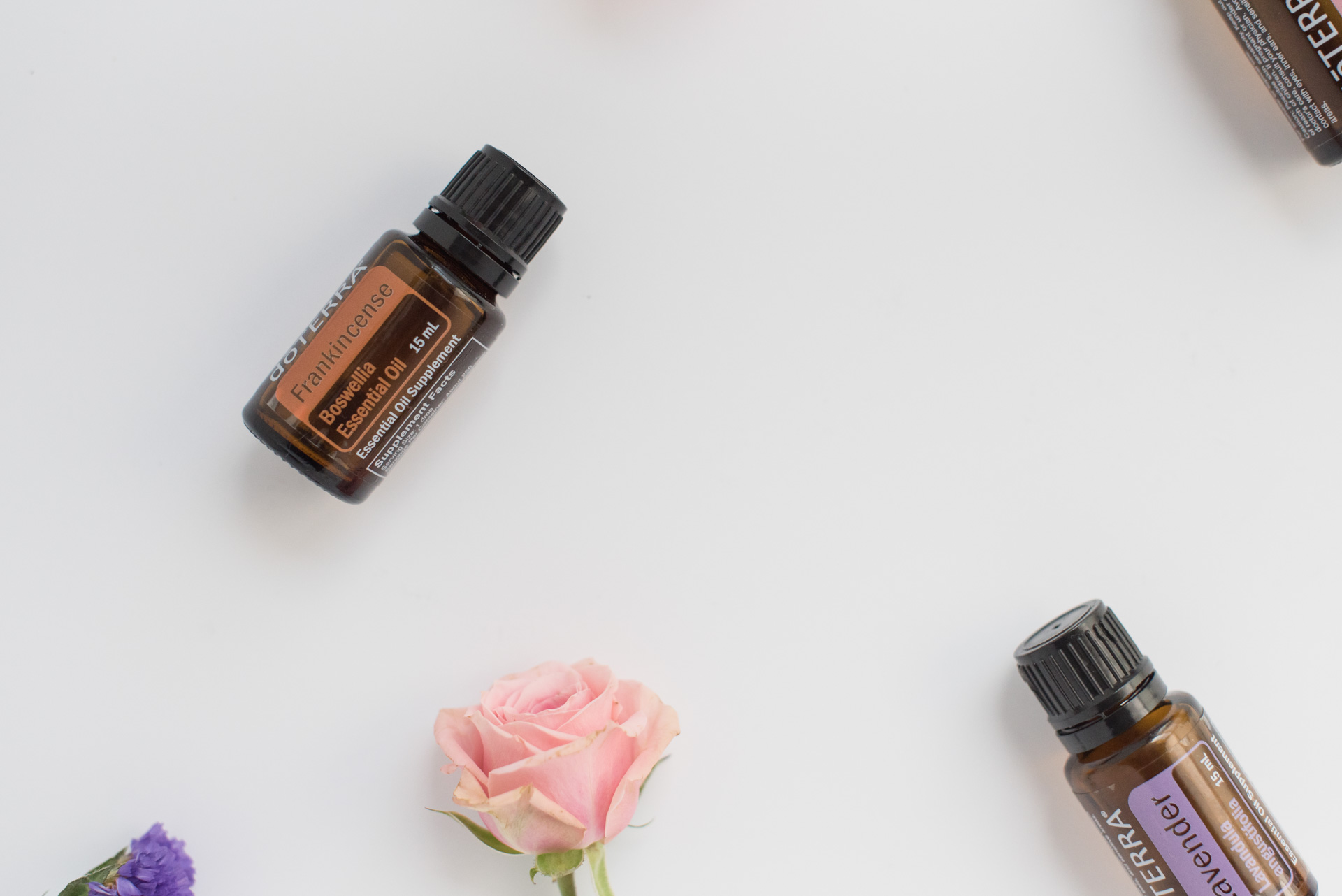 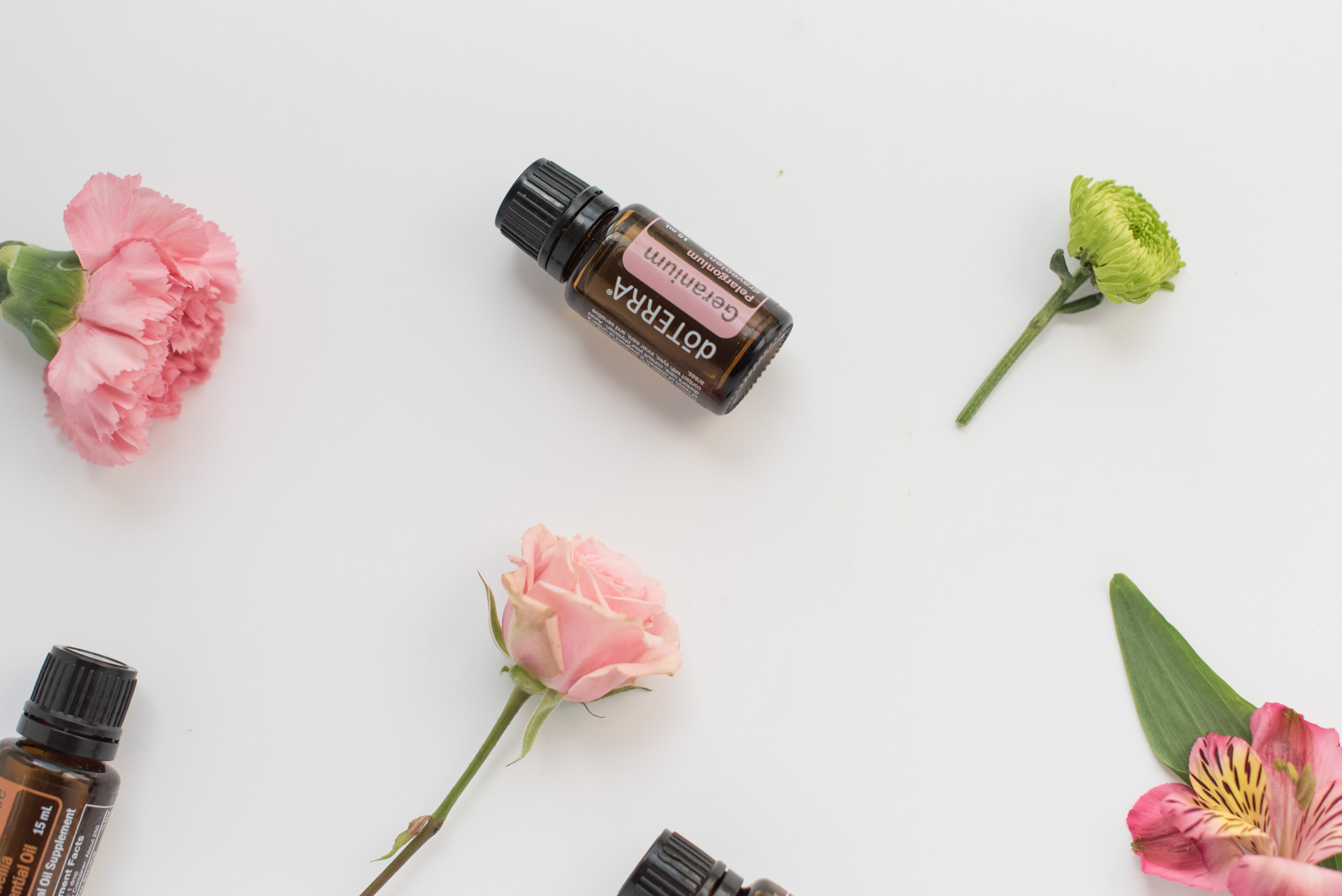 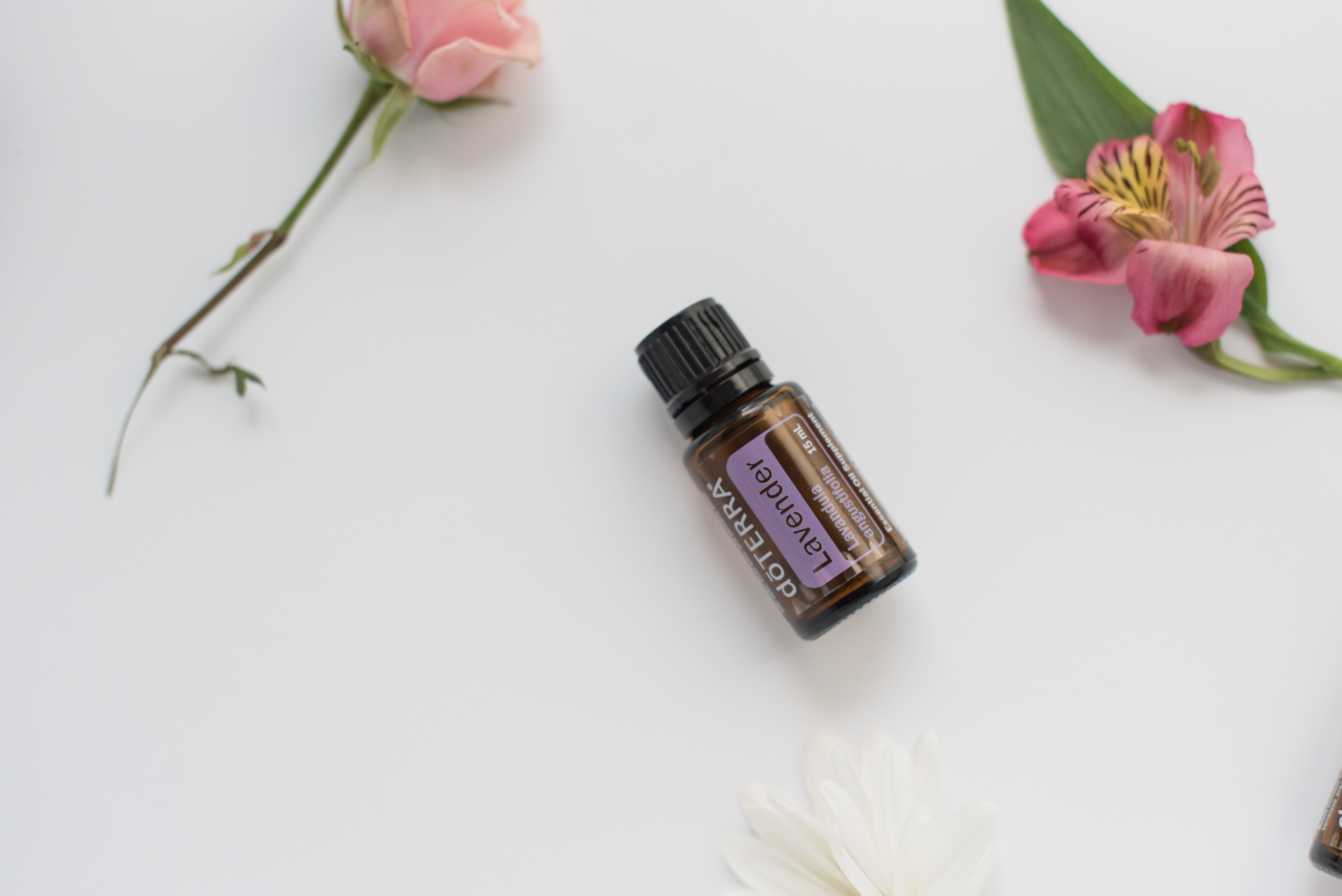 I did evening first because that’s the most important step, for me. The morning, because my skin is so dry, I just use the micellar water, the witch hazel, and then the serum. Very simple.

Because I am a little older, or more mature as I like to say,  I need to exfoliate at lest 3 times per week. I am not trying to kill my skin like back in the day, so I am using more gentle methods. I like Peter Roth’s exfoliator but I just ran out and I think I’m going to try some DIY stuff. I have enough essential oils to care for a small village so I might as well use them. I do not sell EO’s, so please don’t think I’m trying to do that here. I really have seen them work wonders on my skin.

After I exfoliate, I use a mask. Here are some masks that I freaking love. 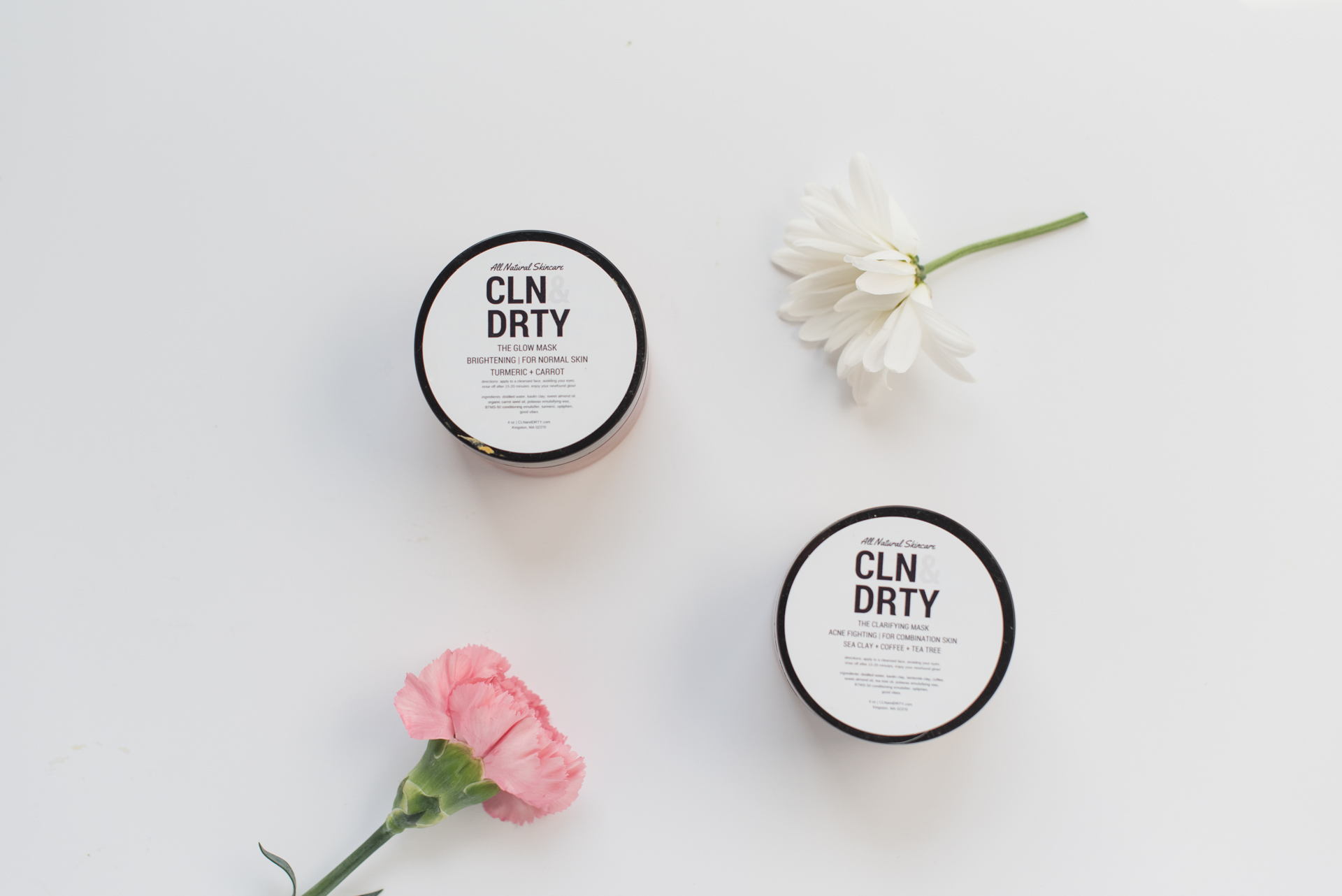 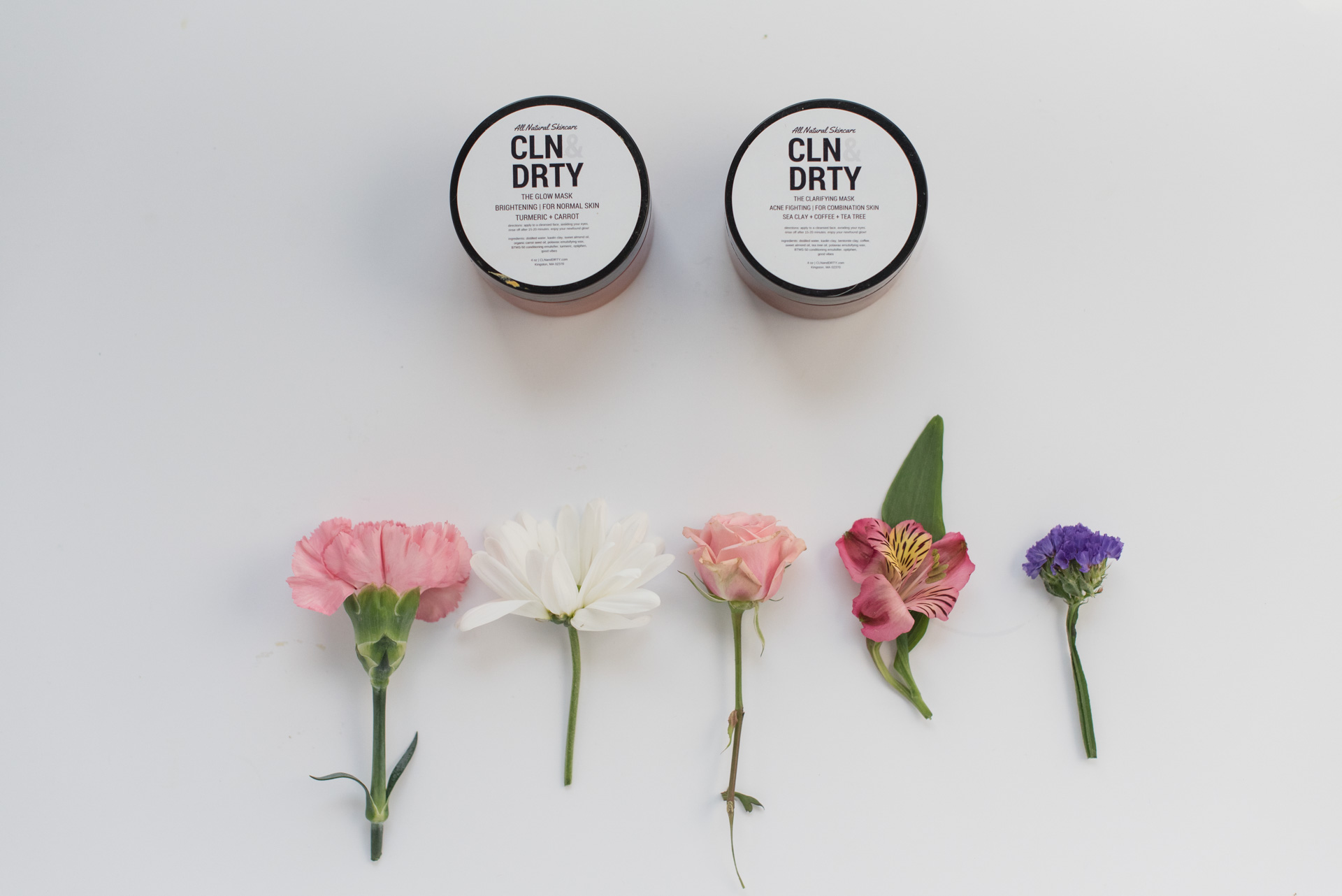 I love these products, I love the owner of the company, I bought these on my own, these are totally my opinions, and I recommend them and her.

There you have it!! That post was long, but I really wanted to show you how I’ve helped my skin not be so crazy. If you watch me on IG, you know that I still have scarring, and some pimples, but compared to 6 months ago, I am totally good and grateful it’s not way worse. I feel strongly that by continuing down this path of natural skincare, it will only get better.

I have two affiliate links in this post. The micellar water and the Thayer’s witch hazel. I am telling you this because I don’t want you to think I’m just trying to sell you stuff. I get no money or commission from anything else listed. I do not sell Beauty Counter or Doterra. I bought every single one of these products and am telling you they are what worked for my skin.

I talked to Paula from CLN & DRTY and she is offering 15% to my readers! I told you she was awesome. Use the code WENDI15 at checkout to receive 15% off of your purchase!!

If you have more questions, please feel free to message me